The concessions are road accessible, located about 20 kilometres (“km”) south-southeast of the town of Chepes within the renowned Sierra de Las Minas District of southern La Rioja province.  The District is reported to host several past producing gold and silver mines.  The city of San Juan is about 250 km by paved highway to the west-southwest.

High-grade gold mineralization was reportedly first discovered within the District around 1865 at the Callanas occurrences followed by limited mining conducted on a gold, silver, and copper zone.  Other sites of historical small-scale mining within the ERSA concessions include the El Espinillo, Callanas East and West, El Abrita, Cerro Alto, Las Lajas and San Isidro gold mineralized zones.

In 2018 the Company completed a limited sampling program as part of its initial due diligence.  From the Callanas East trenches results included a 1m sample that returned 5,619 ppb gold.  A 2.5m continuous chip sample from the north end of the Callanas West exposure showed 5,905 ppb Au, 20.6 ppm Ag and 0.29% Cu.  Later in 2018, Falcon completed its first exploration work on the ERSA Property and on January 7, 2019 reported on its findings.  Table 1 summarizes some of the surface sampling results including:

Table 1: Summary of the sampling and analyses results for the 2018 exploration program on concessions, ERSA VIII, IX & X. Note the high-grade gold beyond the analytical detection limit of 10,000 ppb Au were assayed for better upper grade results (from Falcon News Release dated, January 7, 2019). 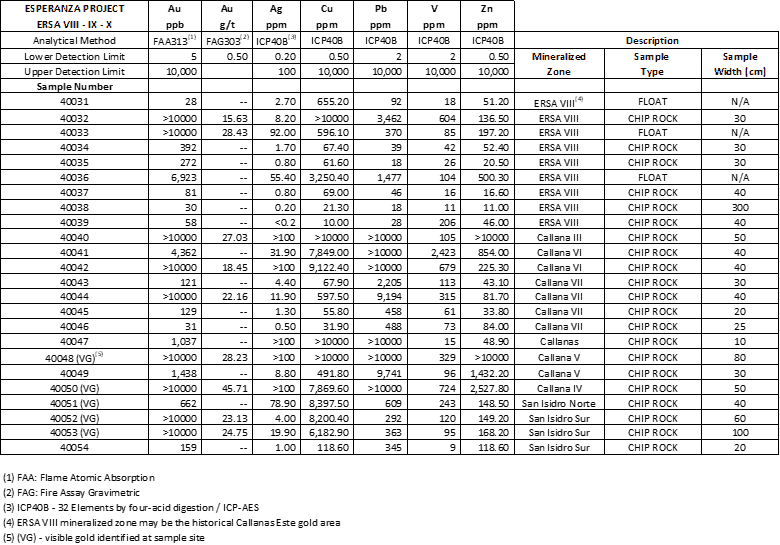 Dr. Daniel Rubiolo, P. Geo., who is a Qualified Person as defined by National Instrument 43-101, Standards of Disclosure for Mineral Projects has reviewed and approved the technical content of this news release.

Under the Agreement to earn its initial 80% interest, the Company has agreed to make payments to the Vendors over a four-year option period totalling 500,000 Falcon common shares and 500,000 share purchase warrants.  Each Warrant will entitle the Vendor to purchase one Falcon common share for a period of 12 months for a purchase price set on each date of issue at 125% of the closing price for Falcon shares traded on the Toronto Venture Exchange.  During the four-year option period, Falcon is to make minimum expenditures on the Property amounting to US$350,000.

Upon completion of payments and expenditures, Falcon will own 80% and the Vendors will retain 20% ownership in the Property.  Following which and for a period of 30 months, Falcon will have the right to purchase the Vendors’ 20% interest (for Falcon’s total ownership of 100% of the Property) for a further payment of 2 million Falcon shares and a US $1.5 payment which includes a 1 % NSR Buy Back with the vendors retaining 1%.