Sokoman-Benton’s new High Grade lithium discovery is less than 10km away. The 35 grab and chip samples are noted in the Sokoman-Benton NR (September 16th 2021) were collected over a 2km distance.

Initial permits for the first phase of exploration on the company’s Hope Brook project in Newfoundland (09-20-2021) Including: high resolution magnetic gradiometry surveys and prospecting crews to the area.

Over a 70km corridor along the Baie Verte Brompton Line (BVBL).

There are more than 100 gold prospects and zones linked to the Baie Verte Brompton Line.

Proximal to the Four Corners Project held by Triple Nine Resources.  The Four Corners Project consists of iron-titanium-vanadium mineralized rock which has been outlined for 3,000m in strike with intercepts 200m wide and 600m vertically. The project contains sufficient tonnage and grades to warrant developing a world-class mineral resource.

Falcon is pleased to announce the company has formed a strategic partnership with Marvel Discovery Corp. (“Marvel”) with the goal of exploring prospective claims recently acquired in the Hope Brook and Baie Verte Brompton Districts. The combined total of both projects covers 115,175 hectares and will be explored together on 50-50 Joint Venture basis. This Alliance further empowers Falcon and Marvel to work together sharing in the potential upside of this impressive land package while reducing costs and capital. The Hope Brook Project will be renamed the Golden Brook JV (“the Property”).

Chief Executive Officer, Karim Rayani commented, “This alliance between Falcon and Marvel provides numerous upside potential to both companies. Synergies of shared capital, administration costs and common goals utilizing various exploration and vectoring tools won’t be hampered by a property boundary line. This will enable the partnership to systematically explore this ground with a common goal of a Tier 1 discovery.”

The Golden Brook JV lies at the northern western edge of the Hermitage Flexure, a predominant geological feature of the south Newfoundland Appalachians. The western Hermitage Flexure is a structurally complex region with a diverse metal breakdown. The structures on the property are linked to west verging thrust faults namely the Bay D’Est Fault Zone and the Gunlap Fault zone. These types of fault zones can be gold bearing evidenced by the most significant gold deposit in the area, the Hope Brook gold mine, which was in production from 1987 to 1997 producing 752,163 ounces of gold. The Hope Brook now owned by First Mining has since been optioned to Big Ridge Exploration which has outlined an additional 6.33 million tonnes at an average grade of 4.68 grams per tonne Au for 954,000 ounces of gold in the indicated and inferred categories (https://bigridgegold.com/projects/hope-brook-gold-project-newfoundland/). 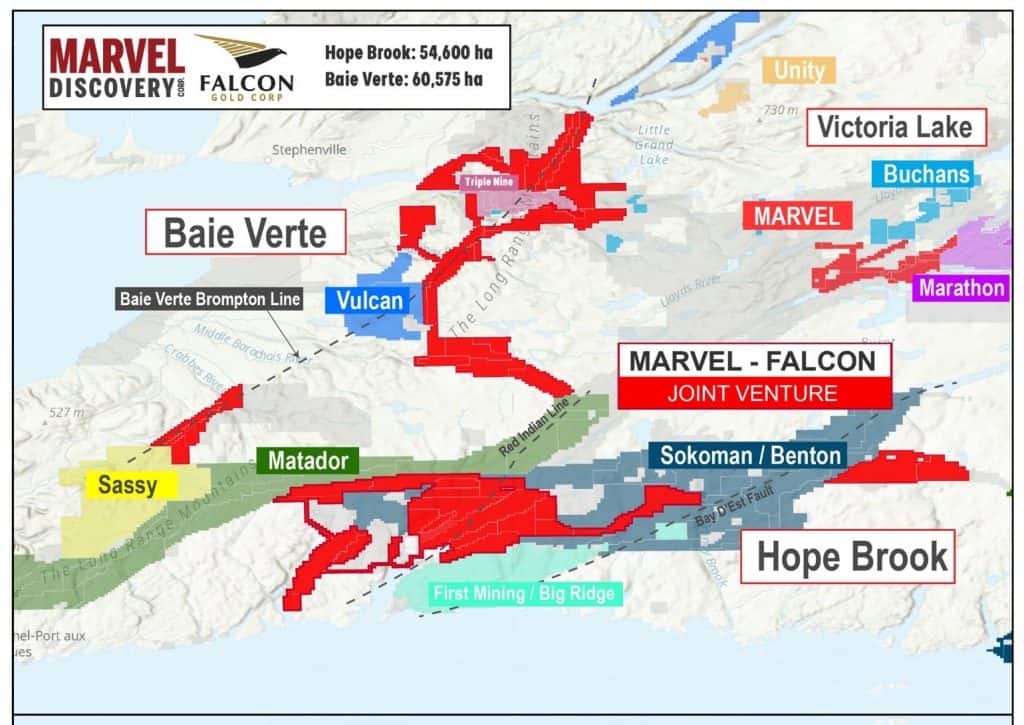 The Golden Brook JV will also straddle both the eastern and western extents of recent land acquisitions by the Benton-Sokoman JV (joint venture) partnership.  Benton-Sokoman made recent headlines with the discovery of the first lithium pegmatite discovery less 400 meters from the company’s newly expanded property boundary. The highly prospective ground held by Falcon shows various lithium clusters that may extend onto the company’s ground.

Other land positions within the Golden Brook JV include ground along the Baie Verte Brompton Line (BVBL). The BVBL project is strategically located in a peninsula that hosts all of Newfoundland’s current gold production. Producing mines include Anaconda Mining Inc.’s Point Rousse gold mine and Rambler Metals Mining operations. Former producing mines include the Terra Nova mine and deposits of the Rambler mining camp. All of these mines are in close proximity to the BVBL. There are more than 100 gold prospects and zones, many of which are orogenic-style, related to major splays and related second-order structures linked to the BVBL. The Matador Mining Ltd. Cape Ray Project reporting 837,000 ounces of gold is also proximal to the BVBL (https://matadormining.com.au/cape-ray/resource/). The Falcon–Marvel partnership now control ground over a 70-kilometer corridor along the BVBL.